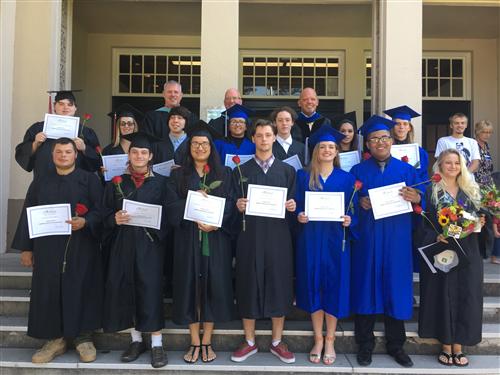 Fifteen summer school graduates walked during the ceremony on August 18, 2016

“Better late than never,” said one student as he prepared to accept a rose and certificate from board members and administrators during the Medford School District’s first ever summer school graduation ceremony.

“I really commend you for sticking to it and showing the perseverance,” said Superintendent Brian Shumate during his speech to graduates. “Sometimes life sends you curve balls, but you’re here and graduating and you are better set up for a successful future because of it.”

Forty-seven students graduated this summer, including South Medford High School’s Danny Franco who just needed to finish one class this summer in order to graduate.

“It was a really nice day and I’m so happy I actually got to walk in a ceremony,” he said.

Franco plans to go to community college before moving to Southern California to pursue an acting career.

North Medford High School Principal Dan Smith compared the students to the famous Wright brothers who revolutionized flight. “You finished, you succeeded and you will be remembered.”