Our high school music programs have been more than busy this year! Between concerts, festivals, and local events, it can be difficult to keep up so we would like to offer some highlights from the 2017 fall season:

The South Medford Chamber Choir was selected to perform for the Oregon School Board Association Conference in Portland. The choir sang for administrators and school board members from across the state in their opening session on Friday.  The singers also had a chance to do some sightseeing and participate in a clinic at the University of Oregon.  This is a big honor for our advanced performing ensemble at South!

On Friday, December 1, the Concert Choir, E! Choir and Chamber Choir will perform at the Providence Festival of Trees event at the Armory at 12 p.m.  This community service event is always a highlight for our choir students because they get a chance to see beautiful decorations, trees, and Santa Claus!

The South Medford High School Choirs are working on music for their Winter Concert coming up on Monday, December 4th. The concert will be held in the auditorium at the MSDEC building (Central High School) beginning at 7:00 p.m. All six of the SMHS Choirs will be performing on this concert.  Songs of the winter season and holiday songs will be the focus of this choir event.

The NMHS choir has been busy with their Choir Camp in September, the SOU Leadership academy with Honor Choir soloist: Emilee Lukens in October and enjoyed a festive Spooktacular choir concert on October 30.

South Medford’s marching band had an active season with the highlight being the introduction of their new show, Fire & Ice, which they performed at many football games and several competitions. They won the High Music Caption at the Pride of the Northwest Marching Band Competition and their drum major, Ryleigh Buchanan, took home the High Drum Major award in the finals, beating out all drum majors in all classifications. Overall, they finished in the top 10 at that competition. The marching band was also invited to play at the grand re-opening of the South Fred Meyer, where they marched and played through the new store.

The concert bands at South had an electric fall preview concert and has several upcoming events: the jazz band will be performing at the Festival of Trees on December 1 and the marching band and color guard will be in the Jacksonville Victorian Parade on December 2. To see the concert band, wind ensemble and jazz band perform, join them at the MSDEC auditorium on December 14 for their Winter Holiday Concert! 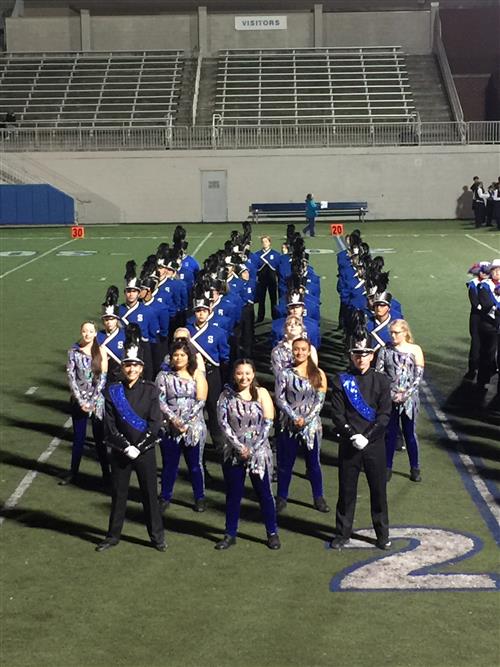 North’s band recently hosted the first Jazz Festival of the season. They welcomed two elite bands to their auditorium, Timberline Express and the Oregon Jazz Ensemble, as well as 15 local highs school and middle school bands. At this event, the jazz bands were able to perform and then receive valuable and individualized feedback from the event’s judges.

North also celebrated with a student musician who earned the prestigious spot as featured soloist in an upcoming youth symphony concert in Southern Oregon. Courtney Badura is a senior flute player in the NMHS Wind Ensemble who won the Youth Symphony of Southern Oregon’s 2017 Concerto Competition back in January of this year. Courtney was featured in the Youth Symphony’s concerts on November 4th and 5th in Medford and Ashland.

On December 9, North will host the North Medford Band Holiday Bazaar where the public is invited to bring friends and shop from 50 + local artisans, crafters and vendors who will be showcasing their talents and products! There will be live music throughout the day courtesy of our NMHS Band. This event supports the band trips & activities throughout the year.

NMHS Orchestras will have their holiday concert on Wednesday, December 6 where small group will perform and on December 12, will be performing a holiday concert at NMHS along with band and choir. Both performances start at 7 PM.

The NMHS orchestra also celebrated with three Hedrick middle school students who were chosen (through teacher nomination) for the Middle School Honors Orchestra, also taking place in Eugene during MLK weekend at the Oregon All-State conference.  Those students are: Marianne Hatley on violin,, Kate Greene on viola, and Jordan Sandler on cello.

We would also like to announce that several of our students have been honored for various musical achievements during the past couple of weeks. The list below shows that the Medford School District will be well represented at both the Oregon All-State Music Conference and the Western International Band Clinic. The high school students were required to audition by submitting recordings of musical excerpts, and the middle school students were nominated by their teachers.